Emerald ash borer (EAB) is an invasive insect from Asia that was first introduced into the United States in 2002. Since its discovery, EAB has caused the death and decline of tens of millions of ash trees. Today, the U.S. Department of Agriculture (USDA) is using ash trees against the pest to help preserve and protect the tree species. Staff in the USDA EAB biological control (biocontrol) program are asking Wisconsin landowners in Sheboygan, Fond du Lac and Door counties to help by donating infested ash trees for use in raising wasps that attack and kill EAB. 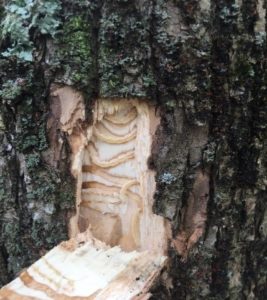 Biological control helps to reduce pest populations through the use of natural enemies such as parasitoids (stingless wasps), predators, pathogens, antagonists (to control plant diseases) or competitors. It is a practical option to suppress pest populations and an environmentally sound method of pest control.

The stingless wasp (Spathius agrili, left) lays up to 20 eggs on an EAB larva. Once the eggs hatch, the wasp larvae feed on and eventually kill the host. A second wasp species (Tetrastichus planipennisi, right) lays its eggs inside EAB larvae when they feed and develop into red-eyed pupae before completing their life cycles.

“Our facility in Brighton, Michigan is one of a kind,” said EAB biocontrol manager Ben Slager. “We rear almost a million wasps each year and provide them at no cost to our state cooperators for release. We’ve harvested EAB-infested ash in Michigan, Ohio and last year in Wisconsin. Over the years we have had to travel farther to find the material we need.”

Staff look for live green ash stands where trees range in size from 8 to 20 inches in diameter and show significant decline, including cracked or loose bark, dead branches, and thinning leaf canopy. They also look for damage from woodpeckers feeding on EAB larvae. This season the staff will scout for potential properties in Wisconsin’s Sheboygan, Fond du Lac and Door counties.

“Right now we are making phone calls to land managers to ask for their help in locating potential sites for harvesting ash trees in the fall,” said Biocontrol Field Team Leader Paul Nelson. “After we get some leads on sites, we’ll visit those locations this summer to determine if they meet the criteria and develop a schedule to begin harvesting sometime in January.”

Nelson encourages interested property owners to call him so they can talk about donating their ash trees and he can answer their questions. “Many people call me because a neighbor or friend told them what we are doing,” he said. “I explain how the process works and what they can expect. There’s absolutely no pressure to make a decision. In fact I recommend that they take some time to think before they move forward. Even after they decide to donate their trees, they can still change their mind.”

USDA is interested in a minimum donation of 50 green ash trees per harvest site. USDA contractors will harvest trees weekdays between January and May at no cost to the landowner and will return the site, to the best of a contractor’s ability, to pre-harvest conditions.