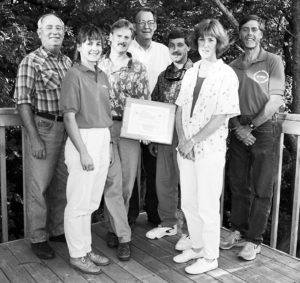 The history of the Wisconsin DNR Urban Forestry program is closely tied to the history of urban forestry in the United States. Although the term ‘urban forestry’ did not come into use until 1965, the concept of an integrated approach to the management of the urban forest ecosystem began to take shape as early as the 1930s. The devastation caused by diseases such Dutch elm disease, phloem necrosis, and oak wilt was a driving force in the development of the field of urban forestry. The term ‘urban forestry’ was first used in 1965 at the University of Toronto to describe a graduate student’s research on the successes and failures of municipal tree planting projects in Toronto. The term was quickly adopted in the United States, where urban forestry had already begun to grow into a national movement. (Source: Mark Johnston, “A Brief History of Urban Forestry in the United States,” Arboricultural Journal 1996, Vol. 20, pp. 257-278.)

In 1978, Urban Forestry was added as part of Private Forestry at the WDNR, and the structure of the program was developed. A DNR Forestry policy issue document from 1977 recommends that the Department “make a commitment to implement an effective urban forestry program” including the establishment of six permanent urban forestry positions. This document explains the need to develop such a program by describing “the steady and often rapid degradation of the typical urban environment” in Wisconsin. This degradation has caused “drastic increases in:

The document lists the reasons for degradation of the urban environment, including a lack of urban planning, disappearance of open space, poor or non-existent maintenance of urban trees, and construction projects that ignore the needs of trees.

Twelve years later, in 1990, the Farm Bill established the Urban and Community Forestry Program, and the Wisconsin DNR Urban Forestry Program officially began. Dick Rideout, the first state urban forestry coordinator, was hired, followed by six district coordinators. They developed the grant programs and set up the infrastructure for a long-term commitment to urban forestry.

In the first issue of the WDNR Urban Forestry newsletter in 1993, Dick Rideout describes the beginnings of the program:

“There has been a lot of activity in urban forestry on the federal level. As a result of President Bush’s America The Beautiful initiative the US Forest Service provided funds to each state to develop an urban forestry program. Most states used the funds to hire a state urban forestry coordinator and a state volunteer action coordinator and pass the remainder through to communities as grants. Thankfully, Wisconsin took a different approach.”

Thanks to this innovative approach, Wisconsin’s urban forestry program is one of the strongest in the nation.