Invasive earthworms in the genus Amynthas, more commonly known as “jumping worms,” were first identified in Dane County in 2013 and have since been reported in 45 of the state’s 72 counties. Verified species in Wisconsin are Amynthas tokioensis, A. agrestis, and the closely related Metaphire hilgandorfi, first identified in September 2017. A. tokioensis is the most common of the three species. A. agrestis typically appears in combination with A. tokioensis but rarely on its own. 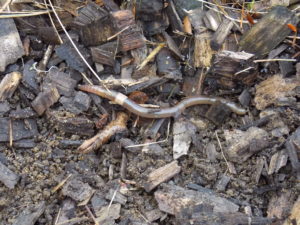 Adult jumping worms are identified by their dark brown color and smooth, milky-white band near head.

Jumping worms have been found primarily in urban or residential areas. This may reflect the fact that they are commonly spread by people moving plants, mulch and soil for use around their homes. Or it may be due to reporting bias, since there is no formal survey for jumping worms in Wisconsin. All specimens are submitted by the public and are typically collected on or near the submitter’s property.

In the summer of 2018, researchers Brad Herrick and Marie Johnston with the University of Wisconsin Arboretum began a two-year project funded by the Department of Natural Resources Forest Health Program for potential control options for jumping worms. Understanding the viability of jumping worm cocoons was the primary focus, since a key factor to the jumping worms’ success in Wisconsin is how well the cocoons can overwinter in the soil. 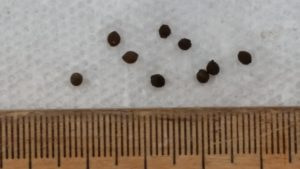 Early data from heat trials suggest that jumping worm cocoons do not survive the temperatures reached in commercial composting. The UW Arboretum research shows that temperatures of about 104 degrees Fahrenheit kill the cocoons of invasive jumping worms. This could be very promising because, even as the research results are in progress, it appears likely that licensed compost products are free of jumping worms.

The early results of heat as an effective control measure are promising for ecologists and horticulturalists, but heat is unlikely to be a “cure-all” solution. There is still much to learn about the life cycles of these worms that could impact research findings. And even if compost is sterilized properly, it could still become contaminated by worm cocoons after the heat treatment is done. Additionally, ecologists believe that worms spread through many other pathways that cannot be controlled using heat treatments, such as machinery that is caked in dirt or the transfer of live plants between retailers and consumers. Nonetheless, knowing that enough heat can interrupt the worms’ life cycles is welcome news as Wisconsin and other states work to limit their spread and potential damage to our northern forests.

Research on jumping worm cocoons has also helped affirm the benefit of several best management practices for controlling the spread of earthworms. For example, cleaning soil from equipment and plant roots limits the spread of invasive plant seeds as well as invasive earthworm cocoons. Future research will address the treatment of leaf mulch and soil products to minimize cocoon viability and accidental transport of worms and cocoons in these materials.

While the UW Arboretum study will conclude in July of 2020, we will continue to learn about new control methods. One promising new development suggests that a compound similar to one found in Early Bird fertilizer occurs naturally in plants with high saponin content, including soybeans, alfalfa and soapwort. We hope to learn if these plants, or products derived from them, can act as a natural deterrent to jumping worms.

In the meantime, outreach and education have been key in our ability as a state agency to collaborate with the UW and countless other organizations across the state and country. As a result of these efforts, our most important partner, the public, has been at the forefront of reporting and helping us all manage jumping worms.