Spruce budworm defoliation is becoming noticeable in northern and central Wisconsin counties as clipped host tree foliage stuck in the caterpillars’ webbing turns rusty red. The caterpillars should pupate soon, and moths will emerge a couple weeks later to mate and lay eggs. Spruce budworm is a native insect with periodic outbreaks that defoliates spruce and balsam fir in the Midwest. 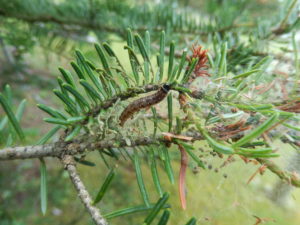 Spruce budworm caterpillar near the silk webbing it spins on branch tips.

Outbreaks occur every 30-50 years, and each outbreak lasts for 10 years on average. Our previous outbreak ran from 1970-1980, while our current outbreak began approximately in 2012. Mature balsam fir and spruce are preferred hosts, although younger balsam or spruce can be defoliated as well. Repeated defoliation can cause top-kill and eventually whole tree mortality. Balsam fir stands, or stands with a heavy component of balsam fir, are often more severely impacted.

Impacts of spruce budworm defoliation include clipped needles and frass on branch tips (left) and branch and crown dieback (right).

Forest managers should monitor mature balsam fir (60+ years old) and spruce (70+ years old) stands for signs of repeated defoliation and top-kill. After three years of significant defoliation, or additional years of lighter defoliation, you may see dieback in the tops of trees. If trees are missing more than 75% of their needles or if the stand has been heavily defoliated for more than three years, including the current year, foresters should consider salvage harvests to capture value from affected trees.

Homeowners with just a few spruce or fir trees to protect can treat them with insecticide. The biological insecticide Btk will work on the caterpillars, as will general insecticides. Defoliation is often most severe in the upper portions of the tree, so homeowners should plan accordingly when spraying and make sure the entire tree is treated. Certified arborists have equipment that can help with this.