Forest tent caterpillar (FTC) is a native insect with periodic outbreaks. Reports of high populations have been coming in this spring from the towns of Nokomis, Three Lakes and Sugar Camp in Oneida County. There is some defoliation in these areas, but the geographic extent of damage is still limited. When looking for caterpillars in northeastern Wisconsin, it was not difficult to find at least one or two of them, which is an increase from past years when it was difficult to find any caterpillars at all.

Forest tent caterpillars go through several instars, or growth stages. Colors vary between stages but all have the cream-colored “boot prints” down their backs.

Forest tent caterpillar outbreaks typically occur every 12-15 years and last about three years per outbreak. The last one in northern Wisconsin occurred from 1999-2002. Many Northwoods residents remember that time because there were vast swaths of defoliated forest, and caterpillars were found in huge numbers. Some residents may remember the “friendly flies,” a fly species that parasitizes FTC cocoons. To some, these large bumbling flies were found to be just as irritating, or more so, than the caterpillars themselves. 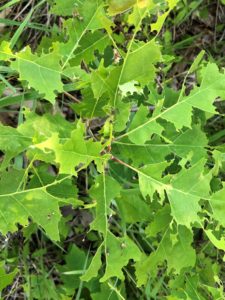 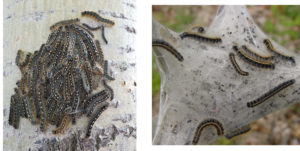