In early June we started getting reports of balsam fir trees rapidly changing from green to rusty red and dying in just a matter of weeks. Reports and observations are still coming in at the time of this writing, so this article gives a brief synopsis of what we’ve seen so far this year. Symptoms have been observed in some northern and central counties. 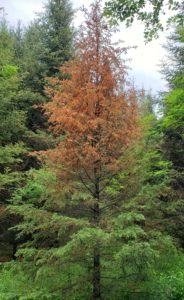 Some balsam fir crowns died rapidly this spring for reasons still being explored.

The pattern of mortality on these trees seems to match what we saw in the spring of 2018. An article summarizing the 2018 event can be found starting on page 28 of our 2018 Forest Health Annual Report. Like in 2018, no insect or disease issues have been identified that could have caused this mortality, leading us to suspect that spring weather events are once again to blame.

The symptoms we are seeing are not the same as normal winter burn or winter desiccation, which can impact conifers by drying out some needles. The winter of 2019-2020 was relatively mild with many winter ice/lake events cancelled due to poor ice conditions. We had many warm days in January, but we also had a few bitterly cold days and nights in March and April.  On April 15 there were extremely cold temperatures around the state, and just two weeks later temperatures soared into the 60’s and 70’s accompanied by a number of days with very low relative humidity levels. Could one of these weather events have prompted this mortality event?

Since we’re still gathering information about this issue, watch for future articles with more information on possible causes, including whether any weather events may have been the trigger.