If you’ve noticed large yellow wasps flying around this summer, you may be wondering whether you’ve seen the Asian giant hornet (aka “murder hornet”). This probably gave you some pause considering all the headlines they received earlier this year,  but fortunately for Wisconsin and much of the Midwest, murder hornets have not yet been found in the region. 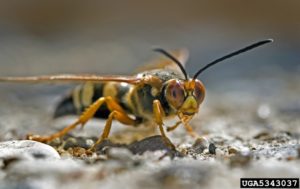 The cicada killer is a common native insect in the Midwest.

Instead, you are most likely seeing a common, native insect known as the “cicada killer.” The cicada killer is a large yellow wasp resembling a yellowjacket, and it is typically docile and harmless to humans. The “killer” in the name refers to the predatory relationship they have with cicadas. Learn more with this blog post from the UW Department of Entomology.