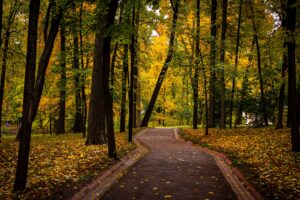 As the hilarious, award-winning Nature RX video series points out, spending time in nature is a potent “drug” for alleviating the day-to-day stress we all face. It is also a powerful way to combat anxiety, depression, and mental illnesses such as schizophrenia. The average American is sorely in need of the stress-relieving boost provided by trees. Eighty percent of American adults are afflicted by stress; forty million are affected by anxiety disorders, and nearly sixteen million experience major depression each year.

In recent years, the medical community has been increasingly recognizing the importance of trees to mental health. A growing number of scientists have been studying and documenting the health benefits of trees. For example, one study found that a 25% increase in neighborhood tree canopy was associated with a 1-point decrease on a 5-point scale for depression, anxiety and stress. Another study analyzed MRI scans of the brains of urban residents who live close to a forest. These residents were found to have an amygdala structure that is associated with a greater ability to cope with stress. (Source)

Of course, many people throughout the centuries have intuitively recognized the role of trees in supporting mental health. Fredrick Law Olmsted, the “father” of American landscape architecture, wrote extensively about the mental health benefits of nature in the 1800s. According to Olmsted, “the enjoyment of scenery employs the mind without fatigue and yet exercises it; tranquilizes it and yet enlivens it; and thus, through the influence of the mind over the body gives the effect of refreshing rest and reinvigoration to the whole system.”

So, when you’re feeling stressed, give yourself a nature break whenever you can. Even looking at trees through a window has been shown to alleviate stress. (And if you’re tied to your computer without a tree in sight, take two minutes for a good laugh with one of the Nature RX parody commercials.)