The sudden balsam fir mortality event in Wisconsin in 2020 was similar to the spring 2018 mortality event, although the mortality this year was more scattered, and fewer trees were killed. 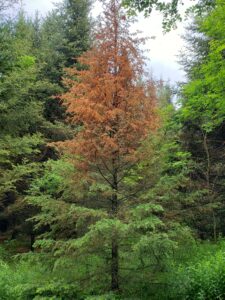 Trees that died suddenly this spring retained their needles, which turned reddish-brown to brown.

Impacts were primarily noted in northern and central counties. The pattern of rapid mortality this year was similar to the symptoms in 2018 and are described below: 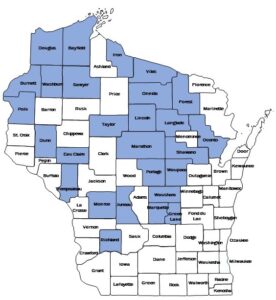 Counties shown in blue had reports of sudden balsam fir mortality this spring. Damage may have been more widespread.

The winter of 2019-2020 was mild, but we had some bitterly cold days and nights in March and April. Mild winter weather, if it includes sunny days, can spur unseasonable photosynthesis in trees, which leads to needles releasing water and drying out at a time when the roots cannot replenish that water. Additionally, when trees are not prepared for them, severely cold temperatures can cause problems for trees.

Searching the weather info for all locations reporting mortality, one commonality seems to be extremely cold temperatures that occurred throughout the state on April 15. By the end of April, temperatures had jumped to the 60’s and 70’s. During that first significant warm-up, we also had several days with very low relative humidity levels, which can really suck the moisture out of needles, putting further stress on impacted trees. Some areas of the state had much lower relative humidity levels, while others were more moderate, so it is uncertain whether this factored into the mortality event. 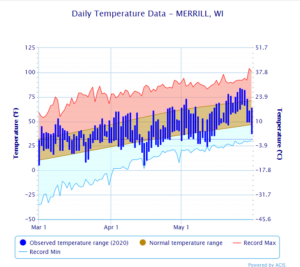 Temperatures for March 1 – May 31, 2020 for Merrill, WI. Warm temperatures occurred in the first part of April, followed by extremely low temperatures on April 15.

In terms of managing these trees, any standing dead or partially dead trees can be removed. No special disposal is necessary.