Have you noticed small, white fluffy things floating through the air? If you have a chance to look closely at these small bits of fluff, you’ll see that they’re actually insects; these are woolly aphids. They produce waxy filaments that help them avoid predators that don’t want to chew on their fluffy excretions. 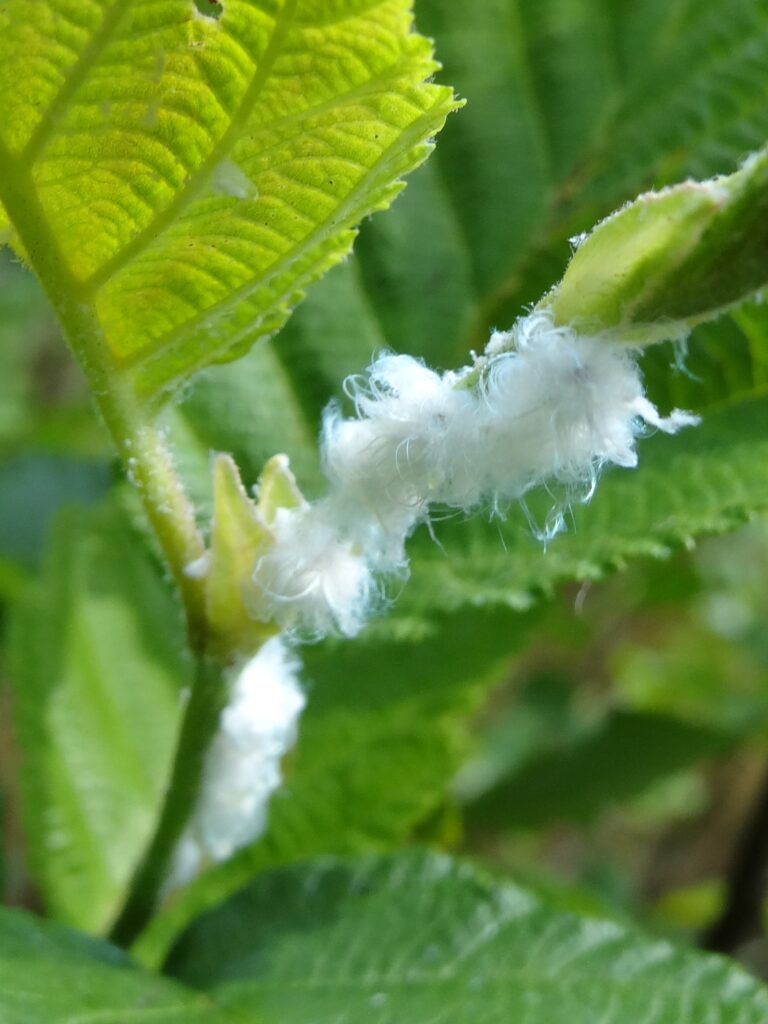 Woolly alder aphid group is protected by the waxy filaments covering them.

There are several species of woolly aphids and each has a favored host and secondary host. A common one in Wisconsin is the woolly alder aphid, also known as the maple blight aphid (Paraprociphilus tessellatus), which moves from alder to maple and back again throughout the year. Some years we also see large populations of the beech blight aphid (Grylloprociphilus imbricator), which is unique in that it waves its abdomen in the air when disturbed, creating a mass of moving white fluff to deter predators. Ash leaf curl aphids (Prociphilus fraxinifolii) are also a woolly aphid, although they don’t have nearly as much waxy growth on them as the previous two mentioned.

Woolly aphids generally use two hosts: One for overwintering and laying eggs in spring, and one for feeding in summer. Woolly aphids generally feed in groups and can be seen feeding on foliage, buds, twigs and branches, bark and sometimes even on roots. Damage may include twisted and curled leaves, yellowing foliage, poor plant growth or branch dieback. The sticky honeydew produced by the insects can coat the plants and may become covered with sooty mold.

Parasites and predators will often feed on the aphids and do enough to control them. Spraying infestations with water can dislodge them from the plant. Spraying insecticides on woolly aphids is not typically necessary and contact sprays don’t stick well to the waxy filaments. Any aphids that are hidden inside curled leaves won’t be impacted by contact insecticide sprays. If populations are high and plant growth is heavily impacted, then systemic insecticides are the most effective treatment. These treatments should occur after bloom time of any plants that you’re treating to minimize impacts to pollinators.