The Entomological Society of America (ESA) has approved “spongy moth” as the new common name for the moth species Lymantria dispar, formerly known as “gypsy moth.”

The ESA gathered a working group of entomologists and forestry professionals to help propose the new name. The name spongy moth—derived from the common name used in France and French-speaking Canada, “spongieuse”—refers to the sponge-like appearance of the egg masses.

The name replaces “gypsy moth” in ESA’s Common Names of Insects and Related Organisms List. The society removed the name in July 2021 for its use as a derogatory term for Romani people.

Learn more about the change from the ESA.

In Wisconsin, we are bracing for possible defoliation by spongy moth in the southern and eastern counties where it is established, as shown on the map. Counties tinted gray are those from which Wisconsin DNR staff saw or received reports of caterpillars and damage in the summer of 2021. 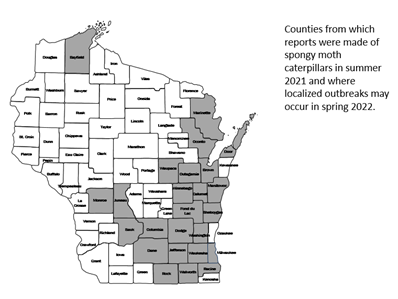 Most calls came from Green Bay, Fox River Valley communities, western Manitowoc County and Madison. The 2021 infestations were local and scattered. However, if spring weather remains dry and warm, the pest’s populations could increase quickly and result in calls for help in June from homeowners dealing with nuisance caterpillars and defoliation of their trees. There is still time to survey trees for spongy moth egg masses in March and April and make control plans if egg masses are common on yard trees.

If we’re lucky, the spring will be wet, and the fungus Entomophaga maimaiga will infect and kill most of the caterpillars before they can do much damage. Wisconsin has gone through two cycles of spongy moth outbreaks in 2004 and 2010. In both of those years, abundant rain in May allowed the fungal disease to crush the pest population before it could cause any significant defoliation.

The DNR’s forest health staff introduced Entomophaga in the late 1990s as part of the Integrated Pest Management program for the spongy moth, which only infects that host. Let’s hope it comes through for us again this year!