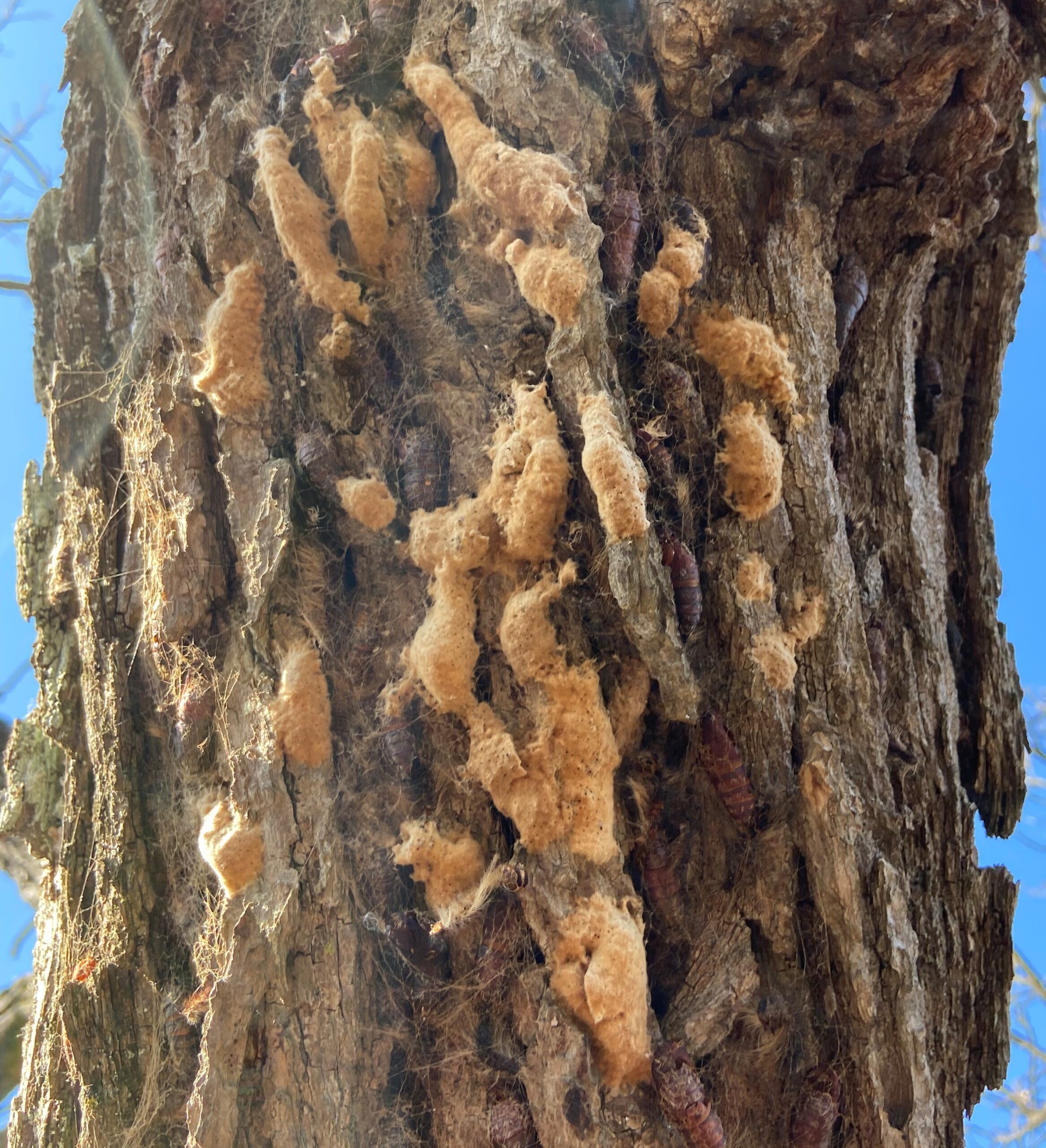 Forest managers planning silvicultural treatments in spongy moth susceptible stands (containing a large proportion of host species including oak, birch, aspen and basswood) are encouraged to annually conduct egg mass surveys in the few years prior to the scheduled treatment to predict if heavy defoliation is likely. The results may indicate that management activities should be altered or delayed until an outbreak has ended. At present, stands that were heavily defoliated in 2022 or are predicted to be heavily defoliated in 2023 are most likely to need a management delay or alteration.

It is recommended that a time interval be left between a stress agent (such as heavy defoliation or significant drought) and stand thinning so that the trees can recover from pre-existing stress before being subjected to additional stress. One growing season is a common interval for healthy stands that are not being subjected to drought or other stresses. A longer interval is suggested if the tree stress has been more severe or if the stand was not healthy and vigorously growing at the time of defoliation. The same interval is probably appropriate regardless of which stress agent is the pre-existing one. A protective aerial spray may prevent tree stress from defoliation but is usually not economically viable due to the high cost of an aerial treatment.

Weather conditions in 2022 remained favorable for populations of spongy moth, and as a result, the area of reported defoliation grew from about 300 acres last summer to over 85,000 acres this summer. This is the second-largest amount of defoliation Wisconsin has seen from this insect since the first defoliation was reported in the late 1990s. Southern Wisconsin experienced several thousand acres of heavy defoliation in 2022, primarily on oak. In northern Bayfield County alone, about 80,000 acres of aspen were heavily defoliated. A few hundred acres of defoliation were also reported from Marinette County and a handful of other locations in Wisconsin.

Recent egg mass observations and adult moth trap catches predict a continuing outbreak (high population period) next summer in many previously impacted areas, as well as a likely expansion of the outbreak into other areas that were not defoliated in 2022. Very unfavorable weather conditions (an extended period of bitter cold this winter, or a cold and rainy spring) would reduce populations or bring the outbreak to an end, but at present it is not known if these conditions will occur. 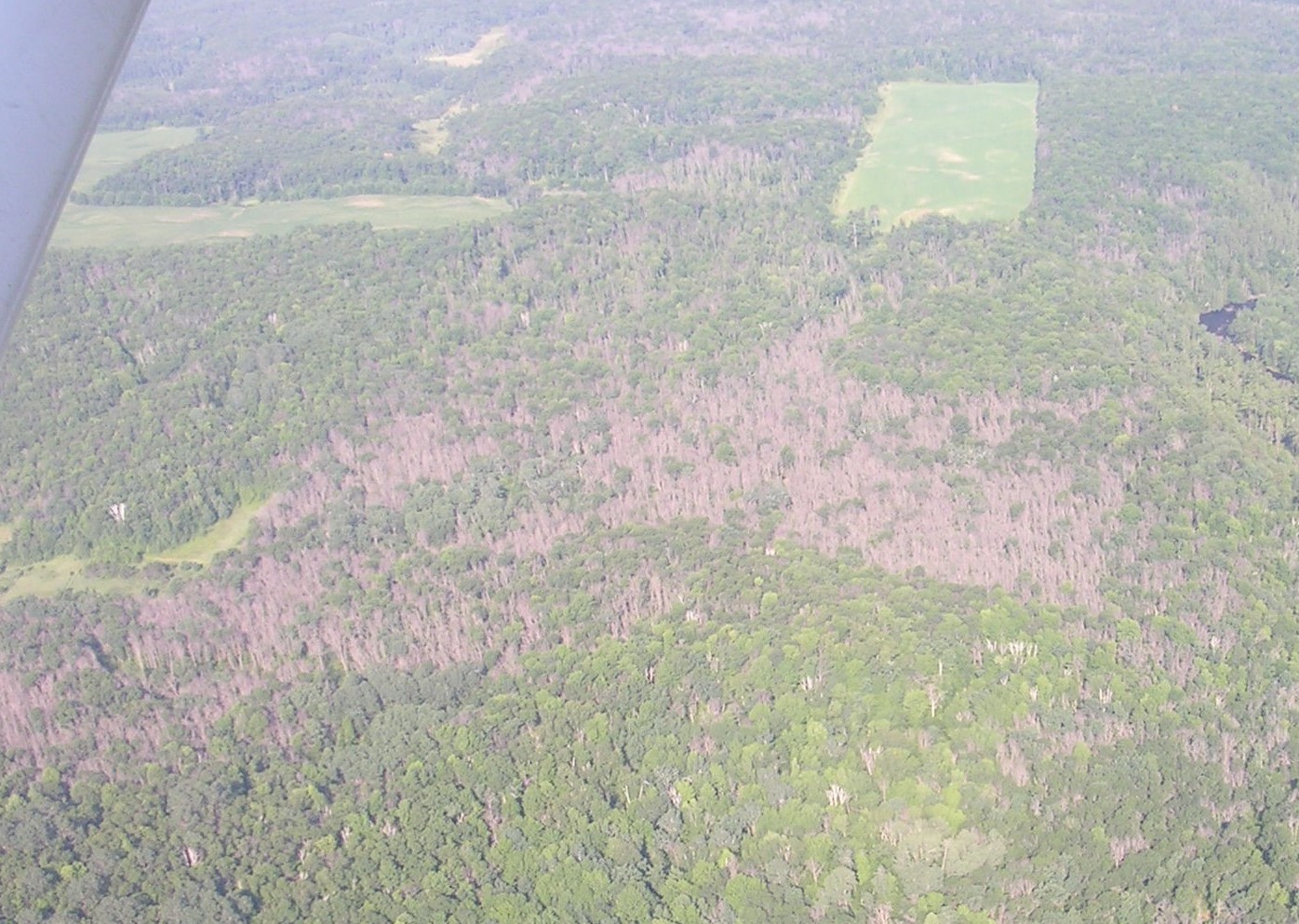 2005 aerial photo of heavy oak mortality in Marinette County. Oaks in this area had been defoliated in 2002 while drought-stressed and overmature. Photo: Bill McNee, Wisconsin DNR.

To date, Wisconsin’s highest spongy moth populations and most intense forest defoliation have been seen on poor sites with sandy soil and abundant northern pin (scrub) or black oak. Ridgetops and south-facing slopes with abundant oak are also highly susceptible to defoliation and mortality. Spongy moth outbreaks can become intense in locations such as central Marinette County, the Legend Lake area of Menominee County, the ridgetops of the Bayfield Peninsula and the Driftless Area when the weather conditions are highly favorable for the insect. Previous Wisconsin outbreaks have lasted for 1-3 years at a single location.

An egg mass survey is the best way to predict the level of defoliation next summer. Spongy moth egg masses are tan-colored lumps about the size of a nickel or quarter, and are found on trees, buildings and other outdoor objects. Egg masses produced in 2022 will feel firm and appear darker in color than older egg masses that do not contain viable eggs.

An older silviculture guide for spongy moth is available for foresters looking to prepare stands for future spongy moth defoliation, or address impacts from the existing outbreak. Most of the recommendations are still valid. However, the arrival of emerald ash borer has meant that ash is no longer recommended for increasing species diversity in a stand. A process to revise the silviculture recommendations is being considered.

Visit spongymoth.wi.gov for additional information about the insect and its management in urban and rural forests. For further assistance, contact a DNR Forest Health Specialist.