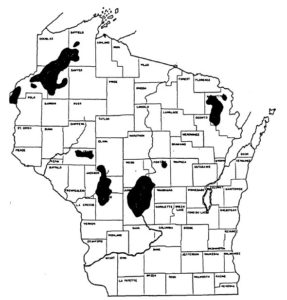 Area of defoliation by jack pine budworm in 1993 shaded in black.

“This defoliator erupted in northern and central Wisconsin to cause moderate to heavy defoliation on 400,000 acres of jack pine. This was the second year of defoliation in Clark, Eau Claire and Jackson counties, and first year defoliation in Monroe County. The largest areas of defoliation were in the northwest where periodic outbreaks are expected. Heavy defoliation occurred in Adams, Juneau, Wood, Clark, Eau Claire, Jackson and Monroe counties. Light feeding was apparent in the Conover area of Vilas county. In Oconto county a 90-acre planting of sapling white pine suffered heavy terminal and upper lateral defoliation. Spotty light to moderate defoliation occurred in Oconto and Marinette counties in the northeast. Defoliation in Marinette county was heaviest in over-mature natural stands of jack pine stands in Silver Cliff Township (Sections 22, 23, 27, 26, 34, 35, T34N, RISE).

In Juneau and Wood counties, tree mortality is expected to be high because many trees lost 90 to 100 percent of their foliage. Salvage harvests were scheduled in the defoliated stands that were predicted to suffer heavy mortality. Some of the harvests in the central and westcentral counties were in potential conflict with the protection of the Karner blue butterfly, a newly listed endangered species. Guidelines were developed to survey for the Karner Blue and for its food plant, blue lupine. The guidelines also contain procedures to prevent damage to known Karner Blue habitat during harvest operations. Many defoliated stands that were scheduled for salvage harvests were surveyed. Late season egg mass surveys revealed a 33% decline from 1992 levels in the northwestern counties portending a decrease in populations and defoliation in 1994. In western and central Wisconsin, the egg mass surveys indicate the budworm populations should remain high in 1994. Egg mass surveys in Wood County averaged 5.8 egg masses per plot. Egg mass surveys in Marinette county indicate defoliation will likely be spotty and variable in intensity again in 1994.”

“Heavy rain from May to July caused flooding of many stands of red and jack pine in central Wisconsin. Many trees were killed during the summer; others were very yellow and will probably die. In some areas the plantations were still under six inches of water in December. In Juneau County, a 20-acre sapling red and jack pine plantation was under 6 inches of water from May through August. Many trees were yellow, and many were dead by October. In Adams County, several scattered natural jack pine stands and red pine plantations were under water for two months. Mortality was heavy east of Highway 13 and south of Rome to Big Flats; the pine engraver was present in the dead trees.”

“The first known extensive defoliation by this insect in Wisconsin occurred near Bardon and other lakes west of Gordon in Douglas County during the summer of 1968. Approximately 400 acres of scrub northern pin oak were completely defoliated in an area that covered parts of Sections 15, 16, 21 and 22, T43N, R12W. The stand of oak was of no commercial value, but likely of high esthetic value to the owners of lakeshore cabins in the midst of the infestation. Larvae were near mature and very numerous in the leafless trees and on the ground when the area was visited on July 31. Many of the larvae perished from starvation and other causes before they completed their development.”