On the north side of Milwaukee is a park with a name more evocative of a medieval forest than one of the most densely populated parts of modern Wisconsin. Yet its history is as rich, its canopy as green and its deer as plentiful as any royal hunting ground. Havenwoods State Forest is Wisconsin’s only urban state forest and thus plays a critical role in connecting urban populations to nature. 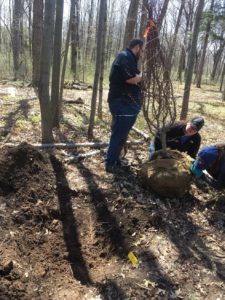 On Arbor Day this past April, forty-five volunteers from Johnson Controls planted 170 trees and shrubs across the property, ranging from small seedlings to B&B trees making an immediate impact on the local landscape. The seedlings were provided by the state nursery in Boscobel, while larger container and B&B trees were purchased from Johnson’s Nursery (no relation) in Menomonee Falls.

The project was made possible by a generous donation from Johnson Controls to the Friends of Havenwoods State Forest, facilitated through the Arbor Day Foundation. The donation covers trees, equipment and maintenance for two years. The critical inclusion of maintenance funding enhances the long-term survival of trees in a disturbed environment home to many deer, rabbits and other hungry creatures.

The volunteers were broken into groups sent to different parts of the property. A large contingent went to a park edge facing a residential neighborhood. This had been heavily impacted by utility work (don’t worry – it was mostly buckthorn), and volunteers planted a number of species of flowering shrubs transitioning to taller trees away from the electric lines. Reforestation was the focus at most of the other sites on the property where past development and previous dominance by buckthorn created a relatively blank slate for replanting. Twenty species of trees and shrubs were planted that day.

Though the planting took place over only three hours, many years of work created the spaces where those trees and shrubs could eventually be located. As always, we must look to the past with an air of gratitude for all the work that was already done.

The area now occupied by Havenwoods State Forest was once the site of Milwaukee County’s House of Corrections. In 1945, the property was seized by the U.S. military to be used first as a disciplinary barracks, and then as a Nike Ajax missile base. Now, however, the forest serves a higher purpose – as a place of learning, respite and peace for thousands of people a year. That is beating a sword into a ploughshare.