Providing timely and relevant information to the Wisconsin urban forestry community is a key role of the Wisconsin DNR Urban Forestry program. One of the ways in which this goal manifests itself is through a monthly newsletter received by 5,555 subscribers (May 2019). In order to ensure that the newsletter content is relevant and timely, the Urban Forestry program surveyed subscribers in spring 2019. Results are shown and interpreted below and suggestions made for future newsletter editions.

One hundred and thirty-four subscribers responded to the survey out of a possible 5,555 (response rate = 2.4%). These respondents came from many backgrounds, the biggest groups being from local governments (29%) and the private sector (26%). Respondents were also geographically distributed across the state, with the only counties achieving 10%+ representation in response being from Milwaukee (12%) and Dane (11%) counties.

A large majority of respondents were satisfied with newsletter content (82%) and timeliness (86%), and most were satisfied with its frequency (77%). Though there was widespread appreciation for the newsletter, there were clearly topics of greater interest to respondents. Plant health was of particular interest to subscribers, with the highest rates of relevance given to Invasive plants, Pests, and Disease. Other high scoring topics (> 80% combined high and fair relevance) included Did You Know (urban forest miscellanea), Publications, Regulations, Research, Taking action and Technology.

The majority of readers were satisfied with the general content of Urban Forestry News (Question 5), with 43% being very satisfied and 39% being somewhat satisfied (82% total); seventeen percent were neither satisfied nor dissatisfied. These results mark a clearly positive view of the newsletter.

However, there were obvious topic preferences from readership (Question 7). Content related to forest health were the only topics about which more than half of respondents found highly relevant. Pests (65%), Disease (65%) and Invasive plants (64%) led the field, but when combined with topics that were fairly relevant to readers, other topics also rose to the top. These included Research (94% total relevance), Taking action (86%), Technology (85%) and Regulations (84%). See Figure 1 for a full breakdown of results. 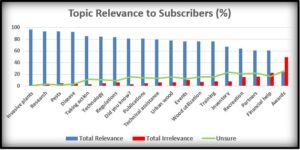 Figure 1. The relevance of each topic to subscribers.

On the opposite side of the spectrum, the lowest ratings for relevance (highly and fairly) included Awards (24%), Financial help (61%), Partners (61%) and Inventory (68%). Despite low scoring amongst all readership, article page views counters some assumptions we would make about these topics. For example, a February 2019 article on awards was visited 400 times, more than twice the average article’s visitation. This may indicate that, though awards might not attract widespread interest, smaller populations are very interested in the topic.

Interestingly, many topics received significant (20%+) amounts of people unsure of their opinion. Awards, Inventory, Partners, and Recreation all elicited substantial uncertainty, perhaps indicating that the topic name was confusing or overly broad.

Forty-nine additional comments were submitted, many of which offered suggestions for how the newsletter could be improved. While most were unique submissions and difficult to summarize, some themes were repeated. There seemed to be a common interest in species selection advice for tough urban sites (e.g. what species are encouraged for street boulevards), while others wanted advice on species selection and treatment with regards to climate change and other environmental disruptions. Many people also desired more stories on what is working well in other communities. Finally, a few respondents noted that they preferred the old printed publication, The Insider.

Newsletter subscribers come from across the state, with unsurprising peaks in subscriber geography in Milwaukee and Dane counties (Question 9). While there is generally a linear relationship between county population and number of subscribers, this is not absolute. For example, there was only one respondent in Racine County, the fifth most populous in the state, while four people responded in Portage County, ranked 20th in Wisconsin. It is also noteworthy that 8% of respondents work out-of-state and for that subset, employment demographics skewed toward the private sector.

Otherwise, local government was the most common place of employment for respondents at 29%, followed closely by the private sector at 26% (Question 10). This tracks with the focus of the DNR’s Urban Forestry program on municipal forestry staff, and secondarily with partners who aid and provide resources to homeowners (industry leaders, utility professionals, arborists, etc.). Surprisingly, about 14% of respondents were retired, possibly indicating former professionals still active as volunteers in the urban forestry world.

While many newsletter recipients were previously subscribed to The Insider (29%), sixty-five percent of the remainder subscribed directly from the DNR website (Question 1). This is the dominant way the DNR has attracted new recipients, though urban forestry staff have also signed up about 19% of the newer subscribers.

Over half (52%) of readers have been receiving the newsletter for more than three years (Question 2). This indicates strong value as readers do not choose to unsubscribe. Fourteen percent are relatively new subscribers (>1 year), and 23% have been subscribed 1-3 years.

Suggestions and Next Steps