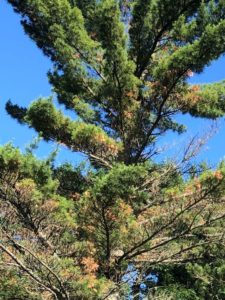 Feeding by the white pine bast scale is causing branch tips throughout the tree to wilt and turn red this summer.

While white pine bast scale by itself has not previously been known to cause problems in white pine, it appears that the combination of the scale insect with the Caliciopsis canker can cause branch mortality. This damage typically begins on lower branches but may occur mid-crown as well. Symptoms of this insect/disease complex can be mistaken for the symptoms of white pine blister rust. 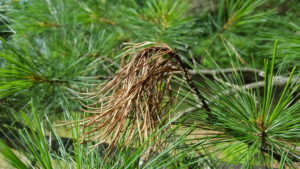 White pine bast scale is tiny and black with a plump oval-shaped body. It lacks both eyes and legs and uses a long, golden-colored stylet to suck sap from the outer layers of phloem (or bast) of twigs and branches. This native scale insect lives under lichens on white pine branches, but multiple samples this year have found them tucked into bud scales at the base of newly expanding twigs. 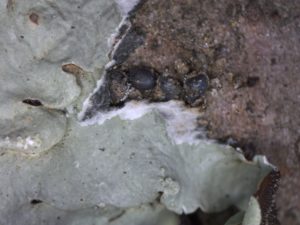 Three white pine bast scales (in center of photo) are exposed after removing the leafy lichen that was protecting them.

The fungal pathogen Caliciopsis pinea causes small cankers, or dead spots, to form under the bark of white pine branches. Many cankers can develop on each branch, and as a branch becomes more severely impacted, it will eventually lose the ability to move water to its needles, resulting in needle death and branch mortality. It is believed that Caliciopsis pinea is associated with white pine bast scale, although other factors may be involved when branch mortality is present. 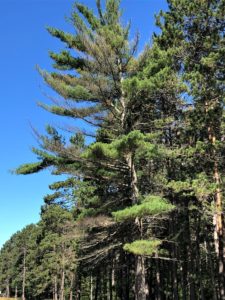 Multiple branches in mid- and lower crown that were killed by white pine bast scale and associated fungus.

Currently, there are no management recommendations. Look for further information in Forest Health News as it develops.