Colonies of the redheaded pine sawfly have been reported in northeastern Wisconsin. They can cause significant defoliation in some situations and may warrant control if larval populations are large. 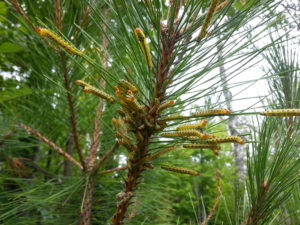 This native insect feeds in groups with many sawfly larvae together on a single needle or branch.

The redheaded pine sawfly has two generations per year, and this life cycle can lead to substantial damage on young pine trees. The first generation emerges in early spring and feeds on the older foliage, while the second generation comes out in mid- to late-summer and feeds on the current year’s foliage. Since pines typically hold onto their needles for a few years, it can be very stressful when a tree loses all its needles in a single year. All pine species are susceptible, but this sawfly species prefers to eat red pine needles. 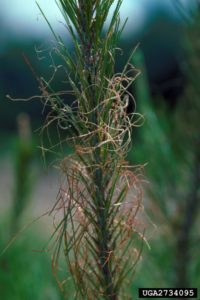 Although I had no reports of these sawflies this spring, I have had reports this summer from Oneida and Vilas counties. If you don’t have very many colonies of this pest, you can use the “clip & squish” control method. Simply clip off the branch, place on the ground and squish the sawfly larvae. Or if you have lots of colonies, you may want to consider spraying a general pesticide. Don’t forget that these sawflies are not caterpillars. “Caterpillar” is the general name we use when referring to the larvae of moths and butterflies. Caterpillar-specific insecticides like Bt do not work on sawflies, so you’ll need to use a general insecticide.

One more interesting tidbit about this insect: if an adult female sawfly lays her eggs before mating, the larvae that emerge from those unfertilized eggs will all be male!