Pine wood nematode (PWN) was recently found to be infecting Scotch pine in Waushara County. Symptoms of pine wood nematode include rapid crown browning (within 3 months) in late summer, rapid drying of wood and presence of blue-stain fungi in the wood. 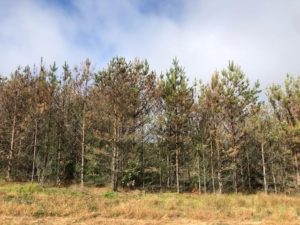 PWN is a destructive pest on pine species in Japan, but it is not known to cause the same severe disease in pines native to the Midwest. Unfortunately, non-native pines planted in Wisconsin such as Scotch and Austrian are highly susceptible. These non-native pines are more susceptible to other insects and diseases as well and were heavily infected with Diplodia fungi at the same site where PWN was found. 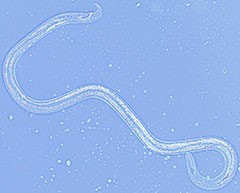 Pine wood nematode under the microscope. Photo by University of Colorado State.

PWN is native to North America but was first found in Wisconsin in 1980 and has since been found across the state. This pest is carried to susceptible trees by longhorned beetles such as the white-spotted sawyer beetle, a native species in Wisconsin. Wisconsin’s native longhorned beetles usually only affect dying and dead trees, which suggests that the potential for PWN to affect healthy native trees is relatively low. Additionally, PWN is known to feed on blue stain fungi which is brought into stressed trees by bark beetles, furthering the likelihood that PWN will impact already stressed, rather than healthy, trees. 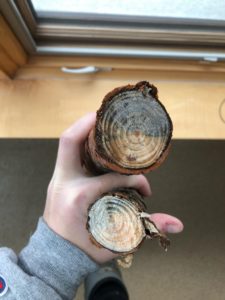 Forest health staff are interested in reports of PWN, so contact your regional specialist if you’ve noticed suspicious symptoms. Planting native stock on suitable sites and maintaining stand vigor are the best ways to prevent issues with PWN at this time.