Viburnum leaf beetle is a relatively new invasive insect from Europe that feeds on the leaves of viburnums and causes mortality after a few years of repeated defoliation. Along with the killing of native viburnum species, which are highly susceptible to the pest, impacts include a higher likelihood of invasive species becoming established following the mortality.

First discovered in 1994 in Maine, viburnum leaf beetle is now spreading through southern Wisconsin. A population was eradicated from Dane County in 2009, and the beetle appeared again in Milwaukee County in 2014. Viburnum leaf beetle has since been found in Dane, Iron, Kenosha, Ozaukee, Washington, Waukesha and Winnebago counties.

Although the adults and larvae of viburnum leaf beetle may be found feeding on viburnum leaves, the characteristic oblong feeding holes and egg pits in twigs are the most obvious signs. 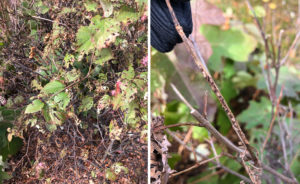 Control methods depend on the environment where the damage is occurring. Landscape viburnums can be protected by pruning out twigs with eggs, applying horticultural oil to twigs prior to budbreak to smother eggs or with insecticides to control larvae and adults. Planting resistant viburnum varieties is another option. Protecting understory viburnums in forests is a much more difficult task. Some native predators like lady beetles will eat viburnum leaf beetles, and research is underway to determine if any of the predators from its native range are appropriate for release as biological control agents. With native viburnums like American cranberry bush and arrowwood being highly susceptible to this insect, an additional concern is that viburnums will be replaced in the understory by invasive plants.

Although already widespread in the northeast US, viburnum leaf beetle has not received nearly as much attention as other invasives like emerald ash borer. Forest health specialists and other DNR staff are asking for reports if the pest is found in forested settings. Contact a forest health specialist if you think you are seeing viburnum leaf beetle damage in forests. For more information check out UW Extension’s factsheet.