Heavy ice and snow loads can cause significant problems for trees. Branches can break under heavy loads, and entire tree tops loaded with snow can come crashing down in windy conditions. Trees that are repeatedly weighed down or tipped over by snow, only to have more snow pile up on them, can be further impacted. 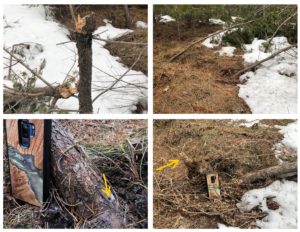 Trees with wounds or damage from insect and disease may be more susceptible to breaking when loaded with snow. In the pictures below, you can see three different issues affecting jack pine. Galls created by eastern pine gall rust caused some jack pine trees to break at the site of the gall. Others tipped over and broke due to previous pine root collar weevil damage at the base of the tree or damage to the roots caused by Armillaria root disease.

Some trees, if not broken or cracked, may be able to straighten themselves over time. This young white pine was bent by the weight of the snow but was able to spring back a bit after some time had passed. 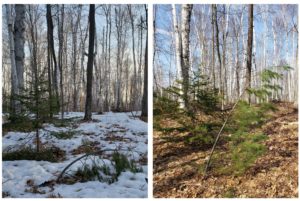 These two pictures, taken March 31 and April 11, show a young white pine that was able to rebound after being released from the snow.

Yard trees damaged by heavy snow loads can be a safety hazard and should be seen by an arborist as soon as possible. Damaged trees may have dangerous features such as hanging branches, partially broken branches, and cracks in the main stem or branch unions that increase the risk of breakage. Depending on the damage, some yard trees may also require pruning to correct their form and protect them from future injuries.

For more information on how snow and ice can impact trees, check out these resources from Wisconsin on how trees are impacted by ice storms and from Minnesota on winter impacts on trees.