Green-striped mapleworm caterpillars feed gregariously, so where you see one, you’re bound to see more. Their preferred hosts are red and sugar maple, but they can feed on oak and beech as well, especially if those species are mixed in with maples. As they feed, they leave behind only the main veins of the leaves. The adult moth is the lovely rosy maple moth. 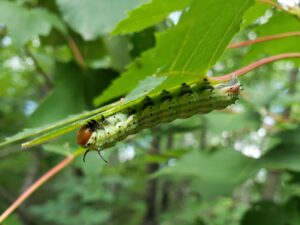 Green-striped mapleworms were spotted feeding on young maples in the understory in Vilas County, Town of Plum Lake. Heavy defoliation of red maple occurred in numerous stands across Polk and Burnett County. Trees exposed to light were most heavily defoliated, with tissues occasionally consumed down to the leaf veins and petioles. 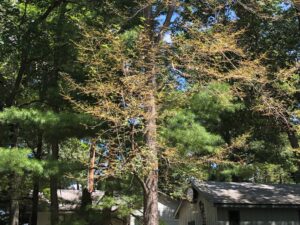 Heavy defoliation of red maple can remove all leaf tissue except the main leaf veins and petioles.

Historically, Wisconsin has had periodic outbreaks of green-striped mapleworm with reported outbreaks in the early 1970s, mid-1980s, late 1990s, and late 2000s. Since this is a late-season defoliator, even significant defoliation is generally not harmful to the overall health of the trees as long as the trees don’t attempt to send out another set of leaves late in the season. If the trees are defoliated and put energy into growing additional leaves in late summer, this can lead to tree stress because they are using valuable energy resources that are needed for the following year. 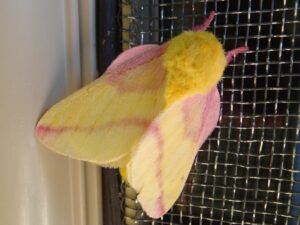