Spruce budworm defoliation was severe in many areas of northern Wisconsin this year. New needles on balsam fir and spruce were eaten, although in most areas the balsam fir had greater amounts of defoliation than the spruce. Feeding by this native caterpillar for several years in a row can cause trees to start to decline and even die, which is occurring in a number of areas of northern Wisconsin.

Spruce budworm caterpillars feed in the spring before pupating in mid-June and emerging as moths shortly thereafter. Adult moths mate and lay eggs, and the eggs overwinter before hatching in the following spring. 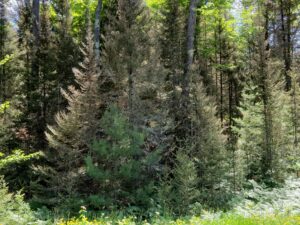 Young balsam fir and balsam fir growing in the understory can be defoliated and killed by spruce budworm as well.

Following defoliation, balsam fir and spruce are not able to produce additional needles in the same year to replace the ones that were eaten. After a few years of defoliation, the trees have no needles left, bare branches are visible throughout the tree, and tree mortality occurs. 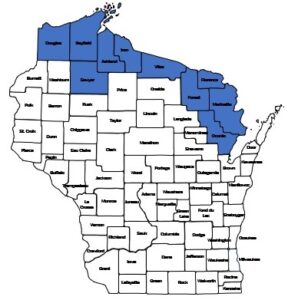 Spruce budworm outbreaks typically last about 10 years and the current outbreak in Wisconsin began in 2012. Literature indicates that some budworm populations will collapse once they have exhausted the food source in an area. This is happening in some places where severely defoliated trees are now dead or dying.

The tree mortality caused by repeated defoliation by spruce budworm looks different from the rapid balsam fir mortality that was observed this spring.