A frost/freeze on the night of May 28 strongly impacted our oaks in areas of central and northern Wisconsin. Some leaves were completely killed while others had portions of the leaf that were impacted. Those leaves with some dead spots have continued to expand and grow but the dead parts of the leaf are causing them to curl and pucker. 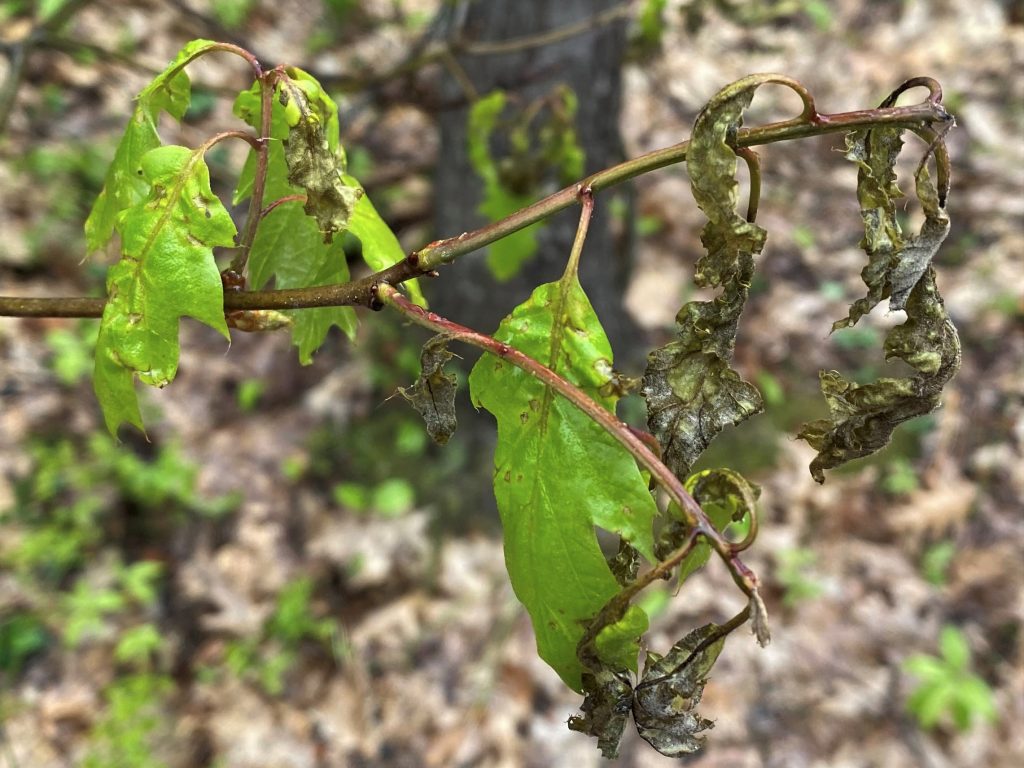 Oak leaves killed by the frost.

Oaks with severe damage have already sent out new leaves. They will retain the partially damaged, curled/puckered leaves even if they sent out new ones that are not damaged. After the first leaves were killed or damaged, the newly emerging leaves were red/maroon colored. These new leaves have remained reddish in color even after they expanded to nearly full size. As the summer goes by they will turn more greenish. These reddish colored leaves may be mistaken for oak wilt symptoms, but these leaves will remain on the tree while trees infected with oak wilt will rapidly drop their leaves in mid- to late-summer. 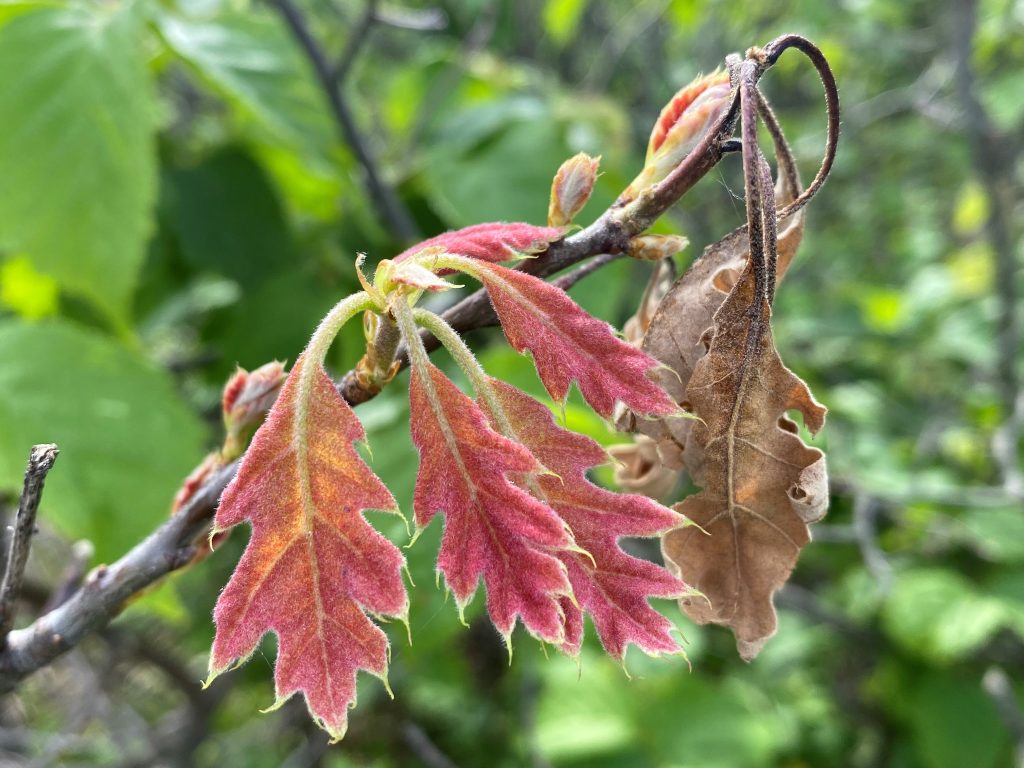 Leaves that were sent out after the frost/freeze event were reddish in color and in many areas remain a reddish color even as the leaves have enlarged.

Several things played into how the frost/freeze heavily impacted oak leaves that night. Damage was most severe on the whole canopy of young oaks in open areas, but there was some interesting variation in symptoms. In some forested areas only the top portions of the tree were impacted as these leaves were exposed to the cold air above the canopy. Large trees in some open areas had the opposite damage where the lower leaves were severely impacted as the cold air sat near the ground but the upper leaves were less affected. 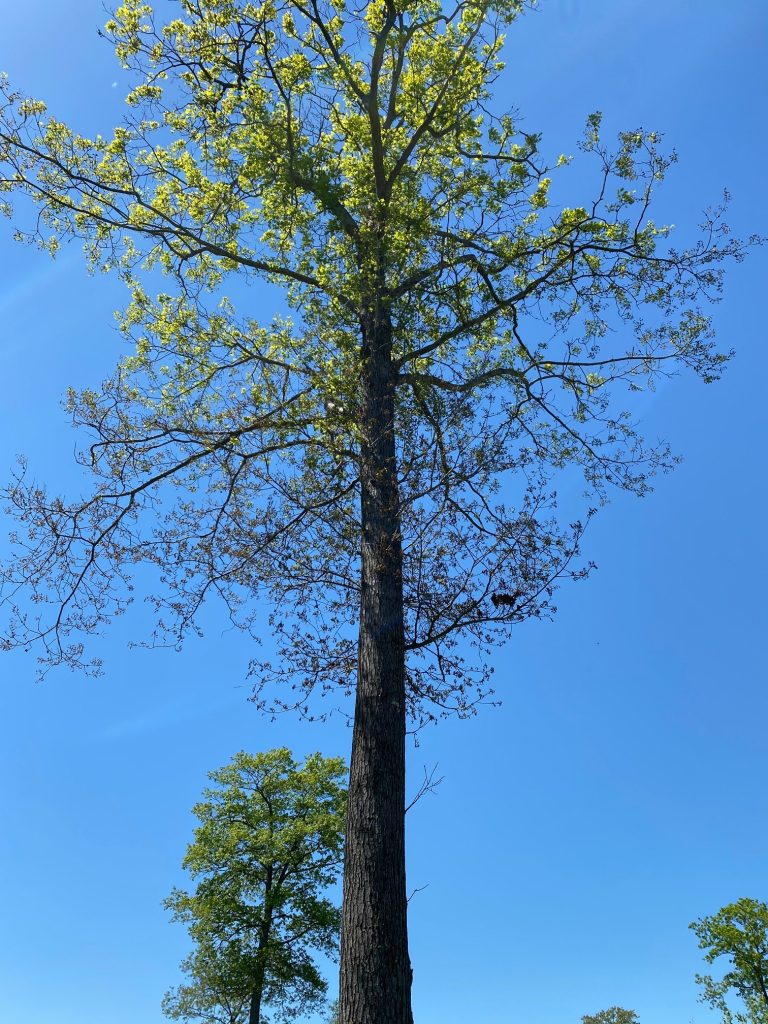 The frost/freeze affected the leaves in the lower canopy of this large tree out in the open. Photo by Ryan Brown. 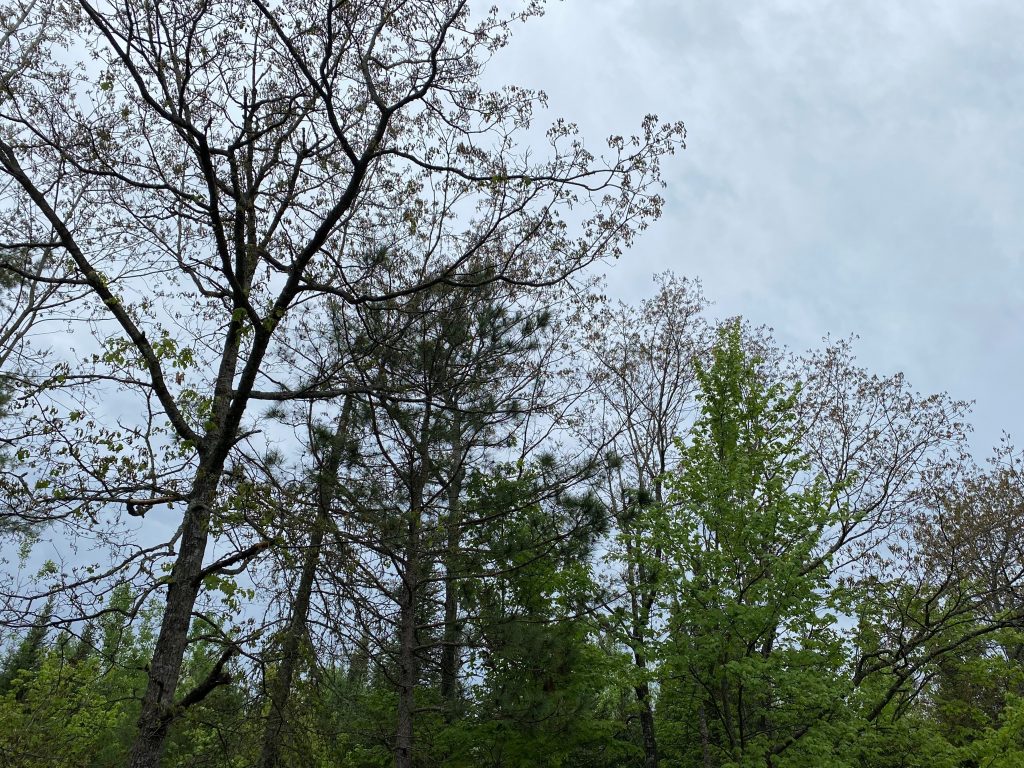 In some areas the entire tree was heavily impacted by the frost/freeze.

Reports of frost/freeze damage on balsam fir, basswood, hickory, walnut and ash have also been received. Early frost damage on ash can look a bit different than on other trees. Ash leaflets damaged by frost will often be dropped by the tree, which can be alarming to homeowners and landowners that suddenly have leaflets littering the ground and a tree that looks very thin. Ash trees that were impacted enough to drop leaves have already sent out replacement leaves to recover and get them through the summer.

Trees that were severely damaged by the frost/freeze should recover just fine, but if your tree is under other stresses you may want to water the tree during dry periods this year.