Acres Of Black Walnut Forests
Black walnut is a valuable and highly sought-after species found in the Midwest and Eastern United States. In Wisconsin, its distribution is primarily limited to the state’s southern region, although scattered sites are found farther north. The total acreage of black walnut in the state has increased nearly three times, from approximately 35,065 acres in 2004, to 101,274 acres in 2019.

Of that total, surprisingly, only 10% is attributed to stands established by artificial regeneration. The distribution of acres by stand age shows a boon in stands aged 31 to 90 years since 2004, with younger age classes remaining relatively steady since 2009 (Figure 1). Relatively few stands have reached ages over 90 years. 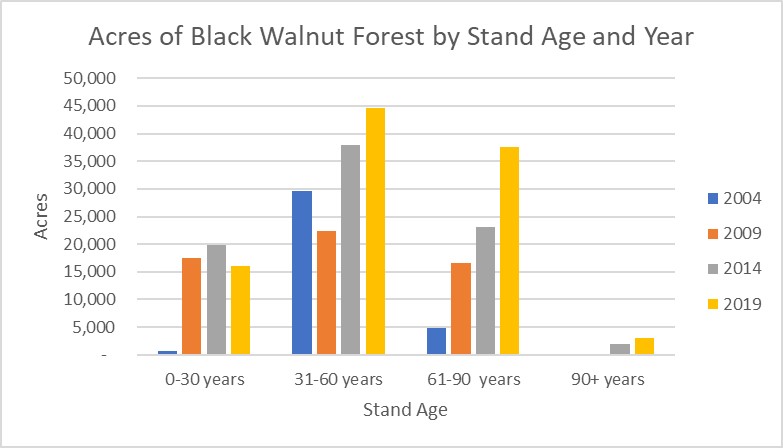 No matter what volume metric you use, the volume of black walnut has increased dramatically and continuously over the last 40 years. The volume of trees greater than 5 inches of diameter at breast height (DBH) has experienced a seven-fold increase since 1983 to nearly 143 million cubic feet (Figure 2); comparatively, overall volume of all species has increased “just” 44.5% in the same timeframe.

Nearly 98% of the volume occurs in the southwest and southeast forest inventory and analysis (FIA) geographical units, which is the northernmost portion of its range. While relatively few acres of Wisconsin’s forests are considered black walnut forests (about 0.5% of total forestland), just over half of the total volume occurs in those forest types. The other half is a component of other forest types, such as mixed upland hardwoods (16%) and oak-hickory (13%). 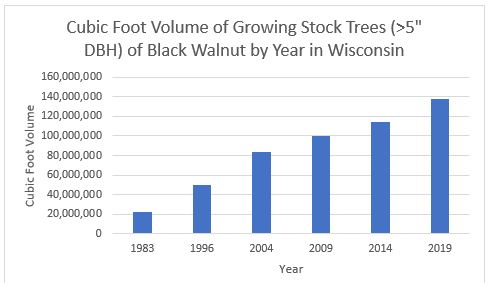 About 31%, or 157 million, is grade 1, 130 million is grade 2 and 27% (136 million board feet) is grade 3. Only about 21% (109 million board feet) of the total board foot volume is currently greater than 19 inches in DBH. The silviculture handbook for the black walnut type suggests that diameters of 20 to 24 inches can be achieved on suitable sites.

About 77% of all black walnut board foot volume is on sites with a site index of 60 or greater. This data suggests that a disproportionate amount of volume is currently in diameters less than what could be achieved for maximum growth and economic value, either due to harvesting before trees achieve that size. Volume across all DBH classes has been increasing steadily since 1983; however, much more so in trees less than 19 inches in DBH, suggesting many black walnut trees are harvested before reaching their maximum potential size or value (Figure 3).

Growth Removals And Mortality
Growth, removals (harvests) and mortality are common metrics to understand how a species or forest type changes over time, giving us clues to the species’ success, utilization and health. The growth to volume ratio is another indicator of black walnut’s success in Wisconsin.

Since 2009, the ratio of growth to standing volume has increased from 3.9% annually to 5.1%. This is far greater than the overall average for all species of 3.1%. Annual net growth (accounting for mortality) follows this trend as well, with a total increase of approximately 49% since 2009.

The growth to removals ratio for a species can help us see if a species is over-harvested. Growth has consistently outpaced removals considerably, with the ratio estimate for 2019 being 5.0—that is, we grow five times the amount of black walnut volume each year than is harvested). This ratio has increased from 3.1 in 2009, suggesting that black walnut growth is healthy and resilient in the presence of active management.

The mortality to volume ratio of a species helps us determine if trees are at risk of any forest health issues. According to this metric, black walnut is one of the state’s healthiest, least threatened species. The mortality to standing volume ratio of black walnut is the lowest of any species in Wisconsin at 0.001, meaning 0.1% of total volume experiences mortality annually compared to 1.2% across all species. 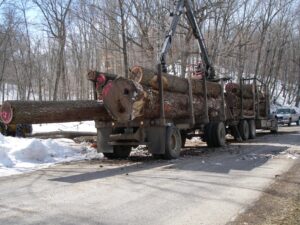